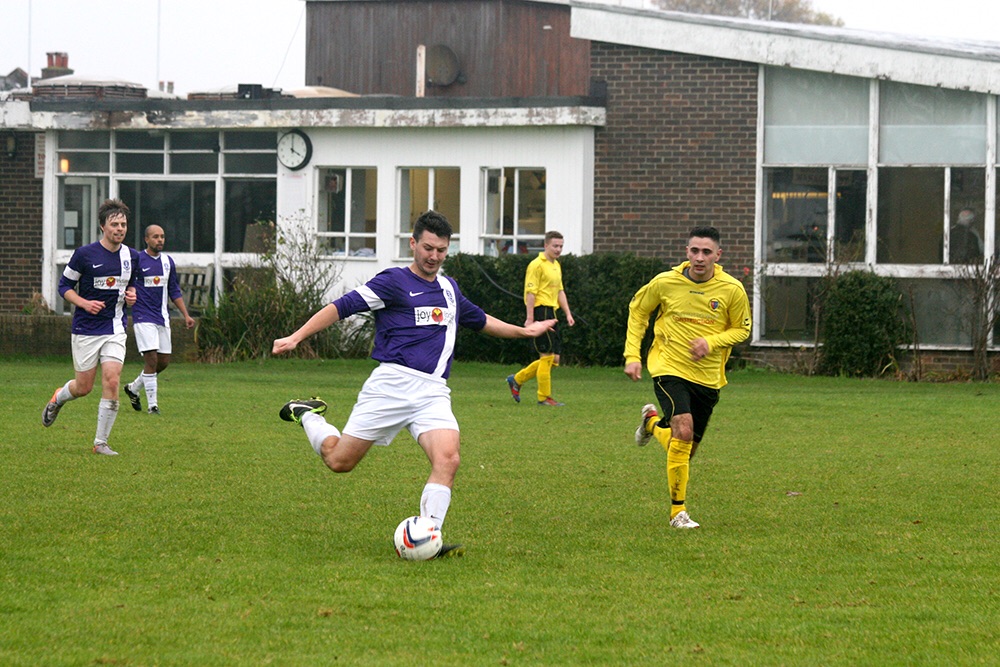 After a run of bad results, Tiffs came back to Grist’s confident of a result with a strong XI (albeit, only XI)… With heavy conditions underfoot and the ball skidding everywhere, the first half was a bit of a slog, with the intervention of a swan proving the highlight of the first 10 minutes.

Tiffs fell behind to a brilliant dipping strike from the opposition striker as the loose ball found some space, and it was after this that Tiffs responded well – finally getting the ball down and pushing some clever passes down the flanks and in behind. From one of these balls we got a free-kick in a handy position, which Dave brilliantly drilled into the top corner. After this Tiffs piled on the pressure, and one of our many blocked attempts on goal was given for a hand-ball with the referee pointing to the spot.

Giddy from his earlier pearler of a free-kick, and with nobody complaining after such a great strike, Dave confidently stepped up to the spot. Only to pass it kindly to the not-so-agile goalkeeper’s left which was easily palmed away. Half time 1-1.

The less said about the second half the better – either side of a brilliant turn and finish from John, we conceded 2 soft goals, one again from a set piece, despite dominating possession for large periods. The goalkeeper made one particularly good save, and Luke was an outstretched lavendar boot away from turning in a cross, but otherwise was relatively untested. Our lack of subs told as the game wore on, as we seemed outnumbered in the middle of the park and were far too susceptible on the break with the defence holding out particularly admirably on a number of occasions. In particular, Andy made a number of telling interceptions, and one particularly brilliantly-timed challenge (honestly) which left the opposition player having to come off.

Overall – disappointing; when we click into gear we can really play our way around teams and into great positions, but our final pass can let us down when we really need it. Onwards and upwards – hopefully a result against the IIIs can raise spirits and put us back in contention.