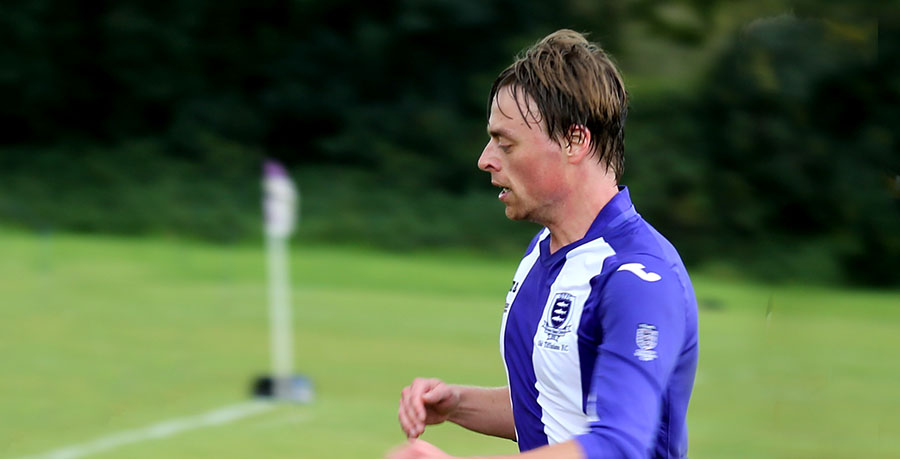 Peake stood, arms folded at the foot of the bed, and checked his inventory for the fourth and final time. Shorts, check. Socks, check. Protein, check. Water, check. Shinpads, check. Bigger shinpads, check. He was ready.

In some ways he’d always been ready. As he picked up his bag and exited the bedroom he let his fingers brush against the posters of great former players who had preceded him in wearing the famous purple and white of Tiffinians. Harry. Sniffer. Nutt.

Maybe today was the day he’d announce himself. Break free of the suffocating, functional shackles his own competent defensive displays had put upon him and emerge as the commanding, all-round midfielder his youth coaches had promised he would become. He longed for the adoration of the raucous terraces, those same terraces on which he’d stood as a boy, face fervent with precious passion and a single sensed desire to don the purple and white.

The game began like so many before it. He barked, he sweated, he toiled with his teammates beside him. Brothers in arms. But today was different. There was an ethereal, unerring calm about Peake. He knew today belonged to him.

Half an hour gone, the game on a knife-edge, he saw his chance.

Strident with self belief, he stepped past the halfway line and peered forward. For the first time in his life he saw clearly. Instinct consumed him, adrenaline coursed, and he swung.

Silence, the net rippled, and then – fervent euphoria.

Peake was a legend. 40 yards. Clean as a whistle. Adoration. The terraces would buzz with recollections and elaborations for generations. All the work was worth it, all the sacrifices, all the tantrums.

Champagne lapped around his feet.

“Lads, man of the match”

(Grists pavilion. Peake jolts and peers up at his captain, eyes bleary)

“Mentions go to Alex, Dicky, Will, Olly, but today’s man of the match goes to…

(applause. somewhere in the background Kimber mutters about never holding on to a lead)

His face said it all. It was a mixture of disbelief and deep regret. Had it happened? Surely it hadn’t all been a dream?

Peake looked mournfully at the crumpled leaf of paper in his hand – two votes, same as always. Crestfallen, bruised, he picked up his bag and trudged wearily into the bleak Hampton Court night.

And here he is, MOTM Joe Sammarco: