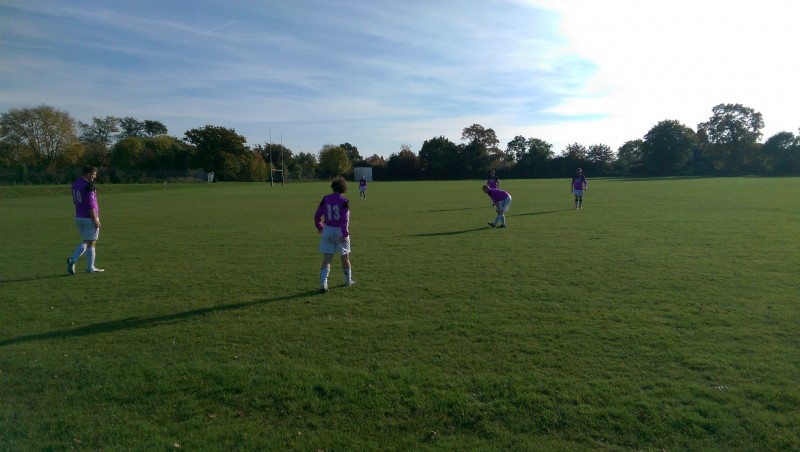 After a hard fought draw in Reigate last week the 3s were feeling confident before the game with Dorking.

In the opening period both teams saw a bit of the ball with attacks both ends. Matt Power especially causing problems with some good runs down the wing.

Tiffs went ahead when a good cross from Power into the area for Aaron Langford to head in.
Unfortunately the lead didn’t last long. A Dorking player rose highest to head at goal which Paul Cotterell was unlucky to see his save come back against the post where another Dorking player was quickest to it to tap it in.

Tiffs started to push on. Langford had a couple of chances cleared off the line from a free kick and a close range effort from a corner and Israel Nagore sent a shot just over when the ball fell to him just inside the area.

Tiffs were finishing the half well and took the lead deservedly through Langford’s second goal. Power put in a deep cross which was headed back across goal into the path of Lewis Baister, whose shot was blocked and after a bit of a scramble the ball ended up at Langford’s feet to put it into the net again.

Tiffs were feeling confident at half time but a slow start to the second half cost us dear.

We allowed their RB far too much time and space to run unopposed from his own half and let fly with an unstoppable shot past Cotterell from 20 yards out.

Not long after Dorking were awarded a very dubious penalty for a push in the area which they converted to make it 2-3.

Tiffs were losing their way a bit now and another Dorking attack ended with a ball being played across the area and in towards debutant OTFC right back Resan Santhakumar, who could only divert the ball past Cotterell and into his own net.

Laurence Hinton was introduced upfront for OTFC and we started pushing forward, but couldn’t make much of our attacks, with the last ball seeming to go astray. We lost possession in an attack down their right, Dorking broke and played a ball over our defenders with their attacker in one on one to make it five. Possibly no way back for Tiffs.

However, we kept attacking and Hinton finished well past their keeper after a Langford through ball to put us back in it.

Ed Whitehouse and Baister then both came close with good strikes. One not far over and the other well stopped by their keeper.

But then the end for Tiffs came when Dorking broke down another Tiffs attack and played the ball to their attacker (who was clearly offside) who again went in one on one to finish the game.

We all struggled to know what really went wrong in the second half, but there were positives as always, we played good football in parts and really pushed them at times, scoring three again. Let’s just work hard to get a win next week.
Thanks to Dan Jackson for stepping in last minute after a few players cancelled.