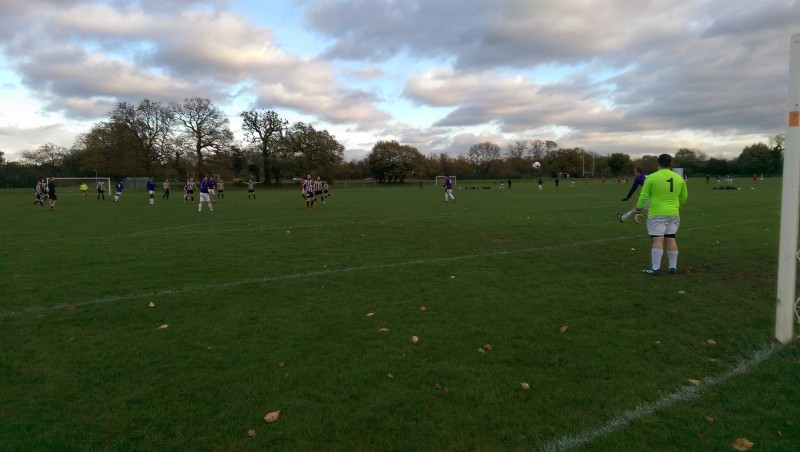 OTFC IVs took on Brent IIIs at Grist’s in Saturday’s AFC 9 South Division fixture.  Brent went into the match second in the table and on the back of a 3-0 away win the previous week.  Tiffs went into the match in fifth place on the back of a 4-0 home victory.  Earlier in the season Tiffs had battled hard in the away fixture against Brent but been narrowly defeated 2-1

The match had been in doubt earlier in the week due to heavy rain.  There was an early morning pitch inspection and the game was given the go-ahead.  A blustery wind, however, made for tricky playing conditions.

Tiffs had the wind behind them in the first half and started the game strongly.  Charlie Hughes’s men have quickly developed an attractive brand of tiki-taka style football this season and they dominated early possession with Resan Santhakumar and Grant Calder pulling the strings in midfield and the Knuchel-Takano brothers linking well up front.

The first goal came against the run of play.  Tiffs possession broke down deep in the Brent half and Brent counter attacked at pace.  Some short passes on the edge of the Tiffs penalty area created an opening for the Brent centre-forward and he curled the ball into bottom left hand corner of the net past Nader Meradji’s outstretched hand.  1-0 to Brent.

Tiffs responded quickly with a flowing move down the left involving Mou Alhashem and Haitham Khorma.  From the resulting corner Calder rose like a salmon at the front post and powered a header towards goal. It looked certain to end up in the back of the net until it hit a Brent defender standing on the goal line on his arm.  The referee pointed to the penalty spot.  The Brent defender was fortunate to escape a red card.

Alhashem stepped up to take the penalty.  He hammered the ball low to the Brent keeper’s right.  The keeper got a hand to the ball but it was too powerful for him. 1-1.

Knowing Brent would have the wind behind them in the second half it was important for Tiffs to at least go in level at half time.  Unfortunately it wasn’t to be.  Brent scored a second goal, almost identical to their first, with the last kick of the first half.  2-1 to Brent.

The second half did not start well for Tiffs.  Brent came out all guns blazing and scored three goals in a ten-minute blitzkreig.  Some heroic defending from Conrad Bell, Steve Newby and Khorma (one tremendous block on the line in particular) and superb finger-tip saves from Meradji stemmed the tide. Tiffs put together a number of neat attacking moves later on involving Hughes, Ahmed Alhelfi, Amr Kadi and Mohammad Ajjawi; Bernard Knuchel-Takano going close with one effort.  But as the sun went down over Grist’s so too did Tiffs chances of getting back into the game.  Brent scored two more goals and it ended 7-1.

The final score probably flattered the visitors but they deserved the three points.  There were reports that Hughes locked his team in the changing room after the match and gave them the hairdryer treatment, which was probably justified on the basis of their second half display.  They have the opportunity to bounce back next Saturday away to Old Kingsburians in the cup.

MOTM: Grant Calder.  Ran his socks off in central midfield putting in some terrific tackles, composed on the ball and had the header that lead to the penalty.  He didn’t deserve to be on the losing side.