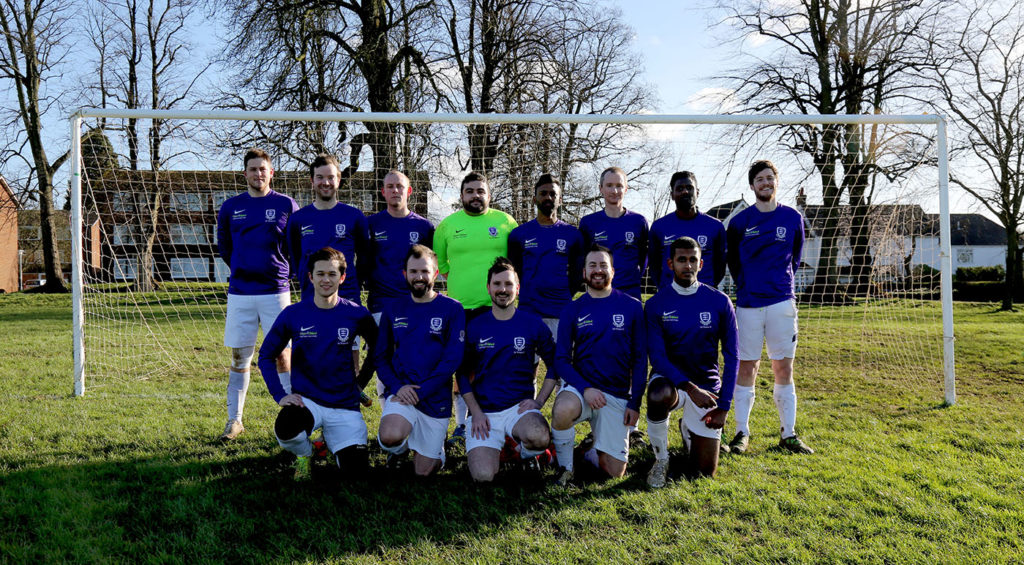 With OTFC IVs taking a hard earned point from league leaders City of London IIIs just weeks ago, the race for the title had been blown wide open. Keen to have a further impact on the race for the title, the IVs travelled to Shene Old Grammarians, knowing that even a draw would prevent their opponents from claiming the title. This match held even greater motivation for utility man Dan Peake, who was lining up against two of his Year 13 pupils, and thus had to be on his best behaviour.

The mind games started early, with OTFC having to travel past a number of ‘Barn Elms’ until they found the correct playing fields. Unfortunately, this proved too much for Ahmed, who managed to get completely lost, and arrived 15 minutes before kick-off. This game also saw the IVs debut of Matt Burns-Peake, roped in to play by his far less talented brother. Matt cockily predicted that he would get ‘at least 10 nutmegs’, and confidence was running high among the IVs. Those IVs who successfully located the changing room were greeted by Euan going through what can only be described as a highly sexual individual warm up. Blaring out some ‘tunes’ from his speakers and gyrating against the floor. This prompted a swift exit from the IVs, who headed out to inspect the pitch.

As it turns out, the pitch was absolutely dreadful. Described as ‘worse than the Battle of the Somme’ by an unnamed IVs player, the pitch was a bowl of mud and goose turds. With about two paces between the touchline and the edge of the box, it was clear that this game would be mainly played centrally and in the air, negating the pace of the diminutive IVs. Upon seeing this, Matt dropped his nutmeg target to 7, and Nader tentatively began kicking goose turds away from his six yard box, clearly not thrilled by the idea of diving in it. At this point, the opposition turned out in force, with a number of what can only be described as giants playing in the middle.

After a rigorous warm-up involving some running, possession football and Conrad nutmegging Steve Newby, we were ready to begin. Before it could start, however, the ref gave the team a talking to, saying he wanted a friendly and polite game, and to treat each other with respect. Some players would take this on board more than others. The game began at a quick tempo, with Shene on the attack for much of the opening. However, the IVs continued to battle, exemplified by Jez leaping like a salmon and winning the ball in the air against an opposition centre midfielder who was at least twice his height. Steve and Conrad marshalled the defence excellently in the early stages of the game, with the opposition striker lamenting how tightly he was being marked, and politely asking Steve to leave him alone so he could score. On the rare occasion that Shene managed to find a free man on the edge of the box, they could not manage to find their way past Nader, who was in imperious form, swatting away venomous shots with ease. In the middle of the park, Matt, Tom and Bernard were seemingly winning the battle of the nutmegs against the opposition midfield, the ball going through opposition legs more often than not. Despite this, the pressure mounted on the IVs, and with a lucky break, Shene finally managed to squeeze a shot past Nader.
This early setback seemed to do nothing more than irritate the IVs, who immediately pushed back and attacked. This was exemplified by Conrad, who burst down the wing, putting the ball through one of Dan’s students’ legs (coincidentally, the same one who had previously announced that “Conrad is a stupid name” to Dan’s class just weeks ago. Karma is sweet). This pressure from the IVs had a swift payoff, with a delicious ball in being headed by Dan’s other student into his own net. Not content with one, OTFC immediately went on the attack again, and as the ball bobbled around in the box, Charlie gently tapped the ball over the line to make it 2-1. Or so he thought. The ref had not seen the ball go over the line and so waved play on. With the first half about to end, the IVs went for one final push into opposition territory. Conrad remained up the pitch for a corner, and as the ball came out to him struck what can only be described as a goal of the season contender. His first touch lifted the ball up into the air. His second flicked it over his own head. His third flicked it back over an opposition player’s head, and his fourth was a cheeky side footed volley from the edge of the area, lifting the ball over the keeper and off the bar into the back of the net. Truly a majestic sight, and unfortunately for Alex Cunningham, who had gone off to play for the IIIs, not one that can be described as a mishit cross.

Buoyed by this moment of magic, the IVs went in to half time on a high. With the opposition needing to win to keep their title hopes alive, we knew we would be in for a bombardment. From the off, the opposition attacked OTFC, dominating possession and playing much of the game in our final third. However, the team held strong. With a number of last ditch tackles from the back four and fine goalkeeping from Nader, it was clear that the opposition was getting frustrated. This was compounded by Dan living up to his Peake ancestry and going flying into a tackle. Matt described this as him being ‘airborne’, and the opposition player went mad (despite Dan winning the ball and not actually really connecting with him at all.) With tensions running high, their right back jumped two footed into what can only be described as a horror challenge, bringing Charlie off of the bench and going super-scouse. In a manner described by Jez as ‘a dad going mad on the touchline’, Charlie lambasted the opposition, shouting that “we all have work tomorrow… or on Monday.”

Despite the IVs best attempts to wind up the opposition (clearly hoping for a City of London style implosion), the pressure eventually told, with Shene Old Grammarians scoring a quickfire double to restore their lead. Needing to score another goal to keep the game alive, the IVs pushed forward, leaving themselves susceptible to quick counter attacks. With the game stretched, the opposition managed to grab another goal, taking the score to 4-2. It was at this point that their right back, seemingly tired of Matt running past him at will, decided to kick out at Matt. Of course, Dan wasn’t having any of this and immediately ran in, screaming a tirade of abuse and ready to start a brawl. Somewhere, Luke Peake was proud. Back at the game, Dan was being restrained by his two students, proving himself a stellar role model. Shortly after, Shene scored their fifth and final goal, capitalising on the IVs need to push forward and hitting us on the break.

Despite clearly winning the game on nutmegs (Matt only managed 6, and thus was fined accordingly), the huge pressure on the IVs eventually told, and we were unable to take any points off of a team that will probably go on to win the league. However, the IVs can be proud of a combative display, and what the opposition captain described as “the toughest game of the season.” Man of the Match deservedly went to Conrad for an outrageous wondergoal and for being a stalwart at the back. Despite this setback, third place remains within sight for OTFC IVs, provided we win our many games in hand. Next up sees the IVs take on the team above them, Old Whitgiftian IIs, knowing that a win could see them climb up the table to fourth.