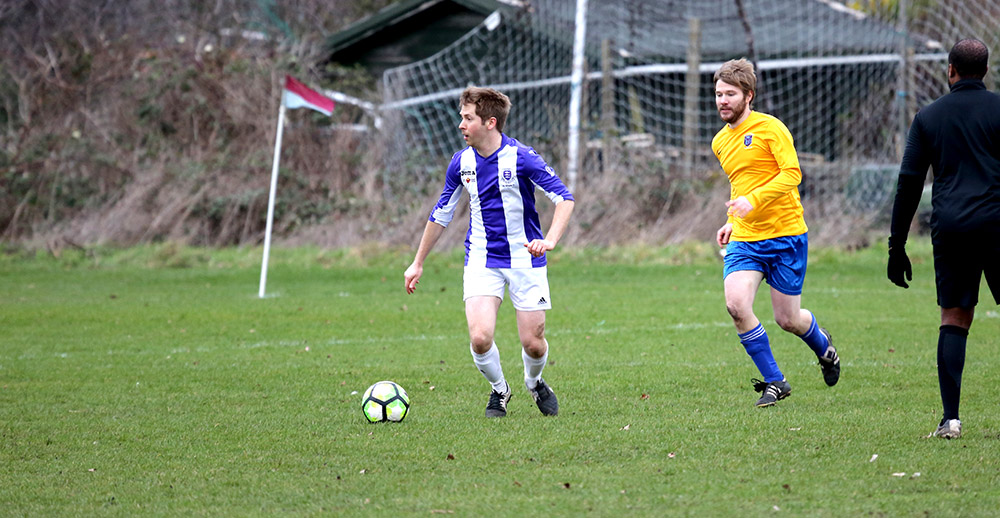 After a bleak few weeks of bitter disappointment and crippling self-doubt, Tiffs arrived at Fortress Grists with the memory of an early season title challenge fading into the horizon.

Woking, scarred from their 8-0 September humbling at the hands of the purps had prepared to handle James ‘pants down’ Kimber’s ambiguous playing style by reconciling to play only in boots and shirts – their ingenuity sadly halted by the referee, who (after reviewing their choice of kit in the VAR room for a disturbing amount of time) insisted on a quick trip to sports direct.

A 3 hour warm up for Tiffs yielded 2 goals and 6 completed passes, so the omens were good.

Finally, the first half kicked off with T’s on the front foot, popping the ball around confidently and building attacks for the first time in months. Chances came, chances went, with Goodings and Owusu-Adu going close, until the inevitable happened and Woking’s players emerged into the Tiffs half, blinking like hibernating moles emerging into daylight, and scored with their first foray forward.

Tiffin, unruffled, continued their concerted pressure and soon after Sammarco squared for Hucks who, presumably aiming for bottom middle bins, buried a fine strike in the bottom corner of the net.

Surely it was only a matter of time before the positive purples broke down the low block of Woking.

The second half began much the same as the first, with Tiffs huffing and puffing without finding a way through and soon frustration began to show in a variety of ways. Passes became longer, chances more snatched, running became frantic, shape was lost, and by the time Forsyth had led an impromptu lecture with the opposition midfield on the importance of women’s suffrage, all momentum had been lost.

Or maybe it was the wind.

One more chance to end the winless streak. Up the purps.

And having the final word – MOTM Jordan: