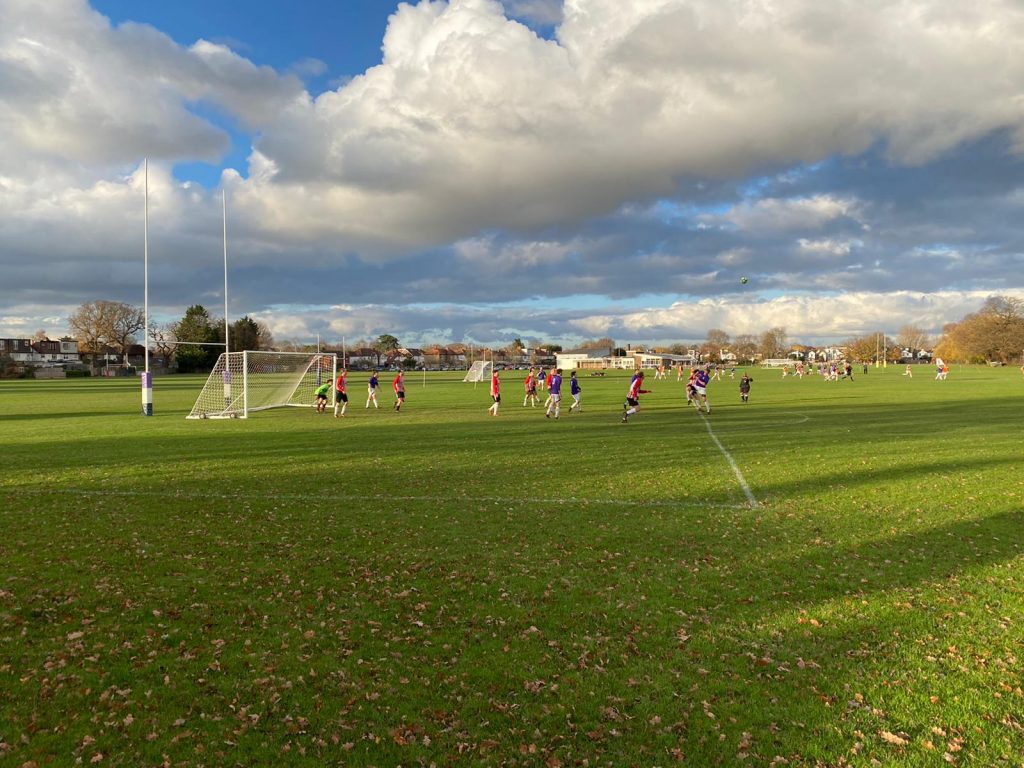 5 long weeks on from the good guys last outing which culminated with drinking tinnies in a park and lock down mark II was over. You could feel the heady anticipation in the air of finally being allowed out on the hallowed turf of fortress Grists once again. The weather had clearly got the memo with clear blue skies and cold winter sun (more on that later). Unfortunately, such giddy excitement had not quite translated to accurate timekeeping with just two of the squad escaping a late fine.

After a succession of excuses about traffic, buses, trains as reasons for being late, some Tom Nicholls chat about having ‘snoods for days’ (fine) and a realisation that the IV’s had nicked our pitch (badmin fine) the good guys were out on the grass again and raring to go complete with shiny new rain jackets. A solid warm up involving Greg confidently predicting that the 60 year old league chairman who plays for Old Sutts would definitely play ‘at least an hour ‘ (didn’t play a minute) and Tom Nicholls having an in-depth discussion about when the sun would set and so which end we should take first (it went behind a cloud within 5 minutes of kick off) the good guys were set and raring to go.

Sadly, the referee wasn’t quite on message and wandered over 10 minutes late. Never mind we were finally on the field and ready to go. Starting in the tried and tested 4-3-3 formation beloved of captain yates the good guys set off at great pace, excited to be back kicking a football again. However, clearly the lockdown fitness regimes hadn’t quite gone to plan and within about 10 minutes the realisation that sitting, eating and drinking for 4 weeks didn’t help aerobic capacity sank in, it was going to be a long game!

Old Sutts started well with some nice passing combinations and keep ball being played, no doubt helped by the league chairman starting as sub (thanks Greg). The II’s were not over awed by this and sat into a good defensive shape and kept the game tight for the first twenty minutes. A pinpoint long ball down the Old Sutts right allowed their player to spring away down the flank and deliver a ball into the box which was duly converted, 1-0 Sutts and not quite the dream start planned by the good guys.

No worries as they drove back, winning a free kick 25 yards out from goal and Thad ‘twinkle toes/jug avoider’ Umrigar stepped up to take. His shot drilled hard and low rebounded off the post with captain yates reacting quickest to follow it in. The Sutts defender managed to get a block in but then his own momentum caused him to knee it in. 1-1 and a shameless attempt from captain yates to claim the goal (assist only) but the good guys were level.

The rest of the first half played out even with only an unfortunate injury to Tom Marshall caused by a knee to the lower back/bum area in the line of aerial defending causing concern. Though Dr TWC gave a typically brisk diagnosis of ‘on the bum? No worries then’.

Another rousing half time speech from captain yates, Dr TWC re-strapped his knee and the good guys were ready to go again. The second half started much like the first with the Old Sutts playing some nice keep ball but the good guys staying resolute in defence. Sutts came attacking down the middle and a big TWC block seemed to have smothered the danger, only for the ball to roll to the top right corner of the box where a Sutts player strolled on to it and dispatched a truly wonderful right foot curling shot in to Nicholl’s top left corner. 2-1 Sutts and the good guys were going to have to battle hard.

No worries as Tiffs went again with a good break through chippy down the left-hand side. A square ball into the box found an unmarked Bambi who played a 1-2 off the goalie and then nodded the ball into the net beyond the despairing dive of a Sutts defender. Back on level terms again and the possibility of a positive result against the league leaders was on.

A truly bizarre scenario played out at the restart with the referee for some reason threatening to sin bin the Old Sutts skipper for some unheard (imagined?) remark. Following a confused exchange, we were off again. That hope didn’t last long though as a long cross field ball found a Sutts attacker in behind Dan Jackson in the penalty area looking very much offside. No luck from the referee and a smart chest control and drilled finish in off the post saw the score 3-2 to Sutts.

With tired legs starting to sap at the good guys and a couple of injuries meant that the gaps started to appear in the Tiffs defence and a 4th goal for Sutts put the game beyond doubt. Final score 4-2 to the bad guys but a good afternoon out.

Some great performances all over the pitch after 4 weeks off (not from the author) saw 7 different nominations for MOTM and a 4-way tie meant a captain yates tiebreak. He plumped for Mr Hogg following an accomplished performance at CB and LB. Onwards and upwards for next week.