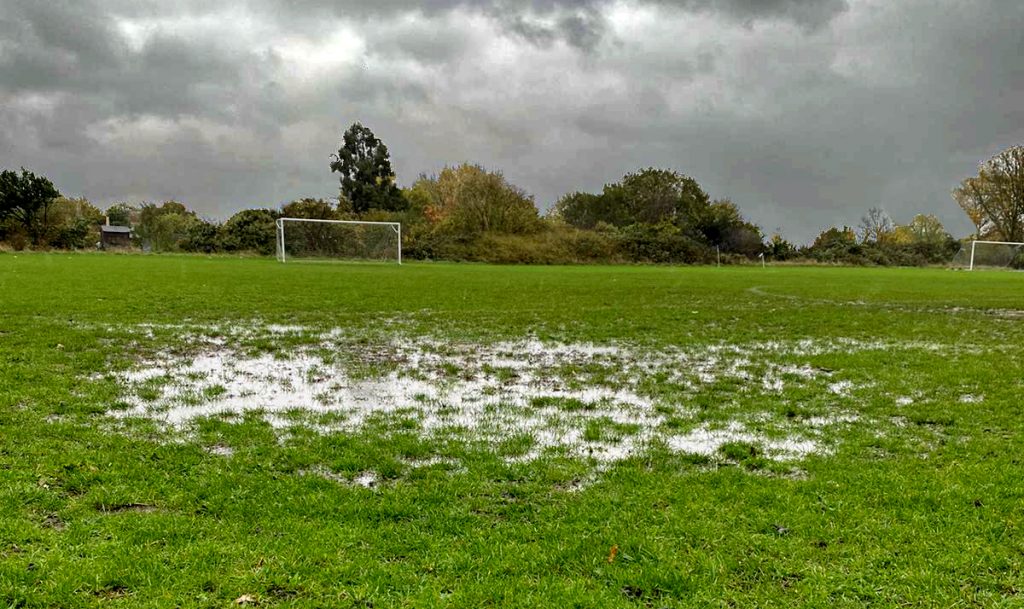 Most of the Good Guys arrived in Chiswick feeling confident. Many were late. After an unfortunate loss to league leaders John Fisher the previous week, a clear core has been established within the IIs. Three wins out of five is almost unheard of from the Good Guys and the standard of football has clearly improved.

During Saturday’s storm, the Good Guys kept warm on the pitch/goose toilet for what seemed like a full hour. Eventually, the referee showed up, ten minutes after the planned kick off with a couple of assistant flags in hand. “Don’t call offsides” he said. “Why’s tha-“. “DON’T call offsides”. And away we go…

The Purps (Oranges for the day) were dominant in the midfield from the start. With Nutty and Bambi winning all of the high balls, and keeping the ball high up in the opponent’s half through Mos, Thad and Chippy. A few tame efforts at the opposition goalkeeper never really worried the shaky Meadonian defence. Converting our chances has not been a strong suit for the Good Guys this season. Just the nine goals scored so far.

Out of absolutely nowhere, BANG, the team in purple (Meadonians for the day) took the lead. Not quite sure what happened there, but honestly, we were on top. Then BANG. How on Earth have they doubled their lead? The pointless (0 points, not a Richard Osmond answer) side picked up these two goals completely against the run of play.

Then BANG (rumble-rumble), Cottee dropped to the floor (rumble-rumble-rumble) in a heap. He’d popped his knee out. Not exactly what you love to see, 20 minutes in. Not many volunteers stepped up initially. It really was an overflowing goose toilet. Hogg, with freshly sanitised hands popped the gloves on, with an element of reluctance, having not worked on his ‘aggressive starting position’ since St Mary’s.

More football. The ball still largely in the Meadonian half, and Bambi cracked the ball against a defender, with Thad towards the back post to stroke the ball in with the inside (maybe outside) of his right foot.

A corner for Tiffs soon afterwards. Flicked on at the near post from Chairman Nutt on to the outside (maybe inside) of Thad’s right foot again! 2-2, game on and the prospect of a jug from Umrigar was coming ever closer to a reality. FINALLY!

At half-time, Cottee had managed to pop his knee back in to place (ouch), and picked up the gloves from Hogg. Another inspiring half-time talk from skipper Yates got the Good Guys back on to the pitch within a few minutes, raring to go, and absolutely nothing to do with the fact that we were a little chilly.

SPLASH. The lake in the middle of the pitch was getting some action. Mainly from Chippy and Bambi’s unintentionally short passing game. All of a sudden, another BANG, and Meads were 3-2 up. Topsy-turvy or what!?

Ben Harrison, ferociously bearded, stepped up around the centre-circle. WHACK. Whilst almost certainly an attempted pass, his ‘effort’ did NOT trouble the keeper. A clear cut chance fine was duly added to the book.

Another corner for Tiffs, and the ball landed beautifully on to Thad’s head and followed with the ball in the corner of the goal. GAME ON. Thad’s imperfect hat trick was complete, and jugs were on the way!

For two weeks running, not a single nomination for Ben H in MOTM. What has happened to Captain Redbeard? Will he return to take back his crown. A well deserved win for Thad in the end, who with his first header-won and first hat trick (I believe) for the club.

A handful of 50p heads, and a very misjudged shout of “TIME!” led to the Meads striker being through on goal, one-on-one aaand slotted it in. BLAST!

Then, not even a 50p head, but a couple of missed heads allowed another Meads striker to leap unchallenged following a corner to wrap up the win for the Purple Villains. A 5-3 loss in the end, but positives can still be taken from the game.

Celebrations/miserations were unable to be held at the riverside arena for Covid reasons, subsequently the 12 socialites spent the duration of their various trips home (including an 80 mile round trip) with a few pint cans, various fines, MOTM awards, and a birthday BrewDog special for Bambi. A job well done.

The author apologises for a lack of description in this match report. There was A LOT of goose excrement, which must have affected my memory.