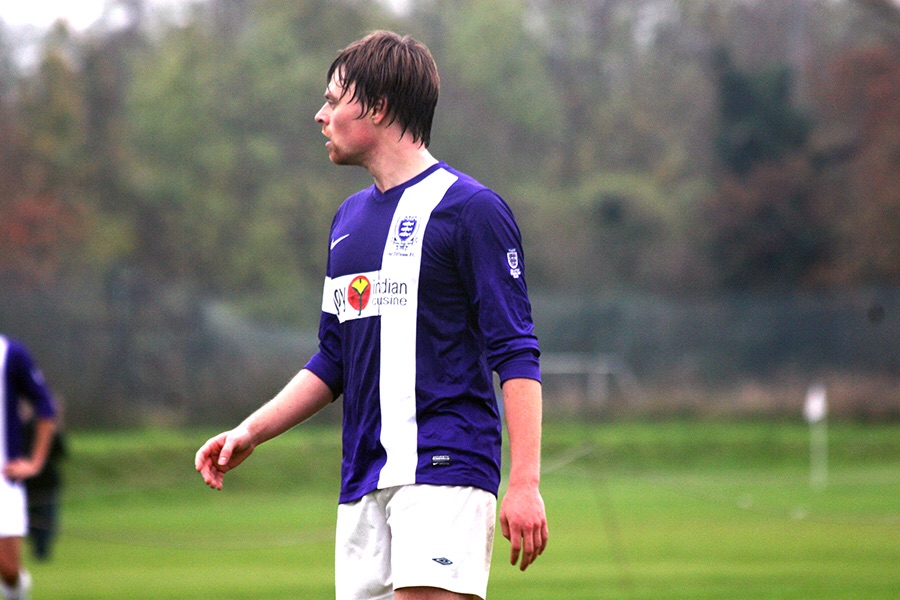 A strong, if a little un-numerous Tiffin side turned out for the early kick-off down at Old Tenisonians home ground in Motspur Park, due to Tiffs usual fortress of Grist’s being practically submerged. (Perfect conditions for those swans-that-were-once-cygnets though.) It was a very chilly morning just over the A3, and once the full squad had emerged from the changing rooms (despite one of us getting confused between Old Tenisonians ground and the Fulham Training Ground next door), we accepted our fate of being a man down, and jogged out onto the frost-covered pitch.

After a few stand-out words from stand-in skipper Luke Peake, Tiffs opted for a shaken-up 4-4-1, bringing captain Peake into the middle with Kuldeep Grewal, and starting John Edwards and Gary Brant at full backs. Tiffin played a very committed first half, letting the opposition come to them and then bursting away on nearly-blistering counter-attacks. Despite the extra man, Tenisonians failed to capitalise until the 41st minute, where Tiffs conceded a soft goal from a set piece, the ball trickling over the line. With some claims that we’d already been playing for at least 45mins by this point, and the ref not seeming to respond to time queries, legs were getting tired, allowing Tenisonians to double their advantage from another scrambled corner in the final seconds of the half.

As the skipper announced at half time, despite the two goals, that was arguably the best Tiffin had played in the last 6 weeks, especially considering the numerical disadvantage. Buoyed by his own motivational talk, Luke managed to end his three-season long goal drought in the 47th minute, firing a right footed shot low to the bottom right of the goal after the ball was flicked out off a corner. The analysts reckon it must be down to Luke’s new sparkly ‘lavender and orange’ boots, which made scoring look so easy. Rumour has it James Kimber is planning on wearing a pair to Tiger Tiger this Friday night in order to test this theory.

Despite coming close again with a few chances soon after, Tiffs failed to break even, and in an unexpected break from Tenisonians, they extended their lead in about the 65th minute to 3-1. Always fighting, Tiffs continued playing at a high tempo, throwing in some crunching tackles, passing strongly, and the wingers sprinting consistently up and down the wings despite rarely ever getting hold of the ball.  Unfortunately, the extra effort required to make up for the 11th man took its toll on the hamstring of last week’s MOTM, Andy Dickenson. A key player at centre-back, Tiffs missed him dearly for the last 20 and couldn’t prevent Tenisonians from firing in a couple more before the end, admittedly all very good finishes.

With the final score at 6-1, it was a huge credit to a dedicated Tiffs team who battled hard and did exceptionally well not to let it be more. The opposition did not cover themselves in glory considering they had a two-man advantage for around a quarter of the match, and were frankly never able to quell the Tiffin spirit. Strong commendations should go to to Ralph Stadie in goal, who made a number of classy saves, and to the back line as a whole, stalwartish in defence, but this week’s MOTM goes to captain Luke Peake – leading by example from the centre of the park, fighting for every header, and ending a (goal) dry spell of probably far too long. Maybe we should play him at CM more often. Hopefully encouraged by a strong performance, bring on next week.