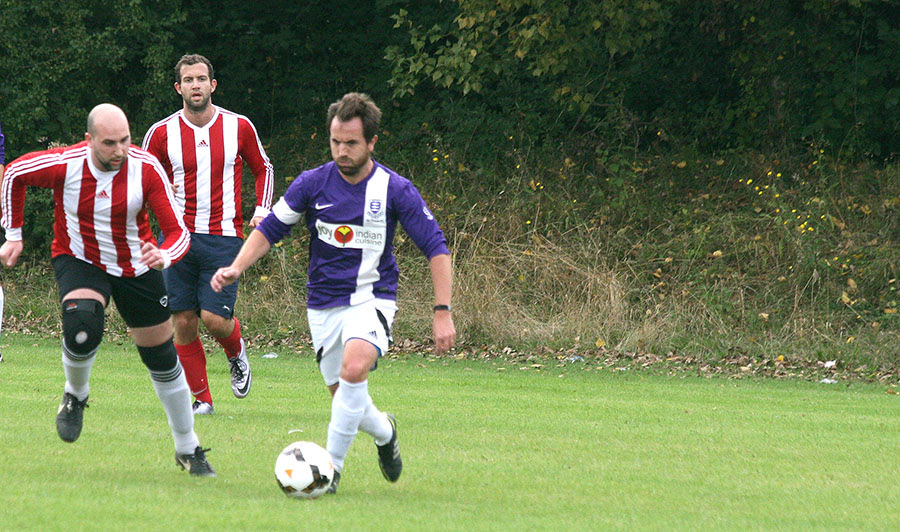 I feel the need to kick this match report off by saying that this feels like a different OTFC 2’s side to previous years. Last year there was definitely a positive energy in the squad, but our victories sometimes came as a surprise and we were often happy with a draw. However this year it is clear before each game that we believe we can – and probably will – go on to win. And it was evident in a game where we let a two goal lead slip to a team that had in a previous game been physically stronger than us. In seasons past, we would have lost this game 4-2, but this team has a fight about it that will definitely help us climb up through this division.

One of the first things you are taught as a defender is to make a strong early impression and to show everyone who is in charge. Captain Dicky – returning from a midseason spa visit –  took this to heart and proceeded to drop last weeks man of the match Ben Lamble down to the fours. It apparently had nothing to do with the fact that Ben played in the same position as our great leader…. [Please don’t drop me for writing this]. Our opposition was a familiar one, with a recent game away at Old Sedcopians resulting in a 2-2 draw. We probably came off that pitch more relieved with the result than they were, but with a closer to full strength side this was going to be a different game. Dicky, determined to not just turn up and park the bus against a strong opposition, went as far as to remove Tom Nichols from the match day squad simply for his inability to park a car. The tone was set.

The formation took many by surprise, opting to focus on our obvious depth in the middle of the park by playing an attacking 4-3-3 and forcing the opposition to adjust to us. This allowed OTFC to take charge of the play early on, with John, Colin and Tommo leading the line. The opposition were in trouble from the outset, and OTFC were camped in their half for the first 15 minutes. The pressure told in an unusual way, when a blocked cross slowly rolled across their 6 yard box. The keeper, not sure if he should pick it up or put it into touch, simply attempted to shield the ball. When Colin eventually closed him down, the ball was there to be won and was casually rolled back through the keepers legs. While an open goal beckoned, it took all of his concentration (and a 25p concentration fine) to slot the ball away to give Tiffin the early lead.

The pressure continued to build, and a second goal wasn’t far behind. The three up front was giving the back four headaches all game, and with Alex Hollamby bursting forward with only the keeper to beat, he selflessly squared to John to calmly finish. 2-0 and this game looked out of sight. However it will never be that simple, and as OTFC pushed on for a third, a promising passing move was broken up in their box and after two quick passes they were through on goal. Dan came out to close the angle, but it was too little too late and a calm finish put them back in the game.

This appeared to rile our French maestro d’Artagnan, who must buy his knockoff 25p handbags at the same place as Tommo judging by how often they are both seen to be throwing them around. What looked like an innocuous tussle in the corner resulted in Tom telling the forward to ‘fuuck uufff’ [Editor – please read in a strong French accent]. Andy Dickinson, returning from the boo-boo he picked up in an earlier game, decided to get involved by pointing out how fat the striker was. When it was explained to him that he was not as fat as first thought, Andy showed quick thinking by instead calling the next nearest player fat instead. Which he was. So all was ok again. 2-1 at the half and things were looking ok.

A change at half time brought on Gaz from Supergrass to join the attack, and the welcome return of Will Forsyth to the mix. I can’t really remember much of the next 15 minutes, so lets fast forward to when James Kimber nearly cost us the game. A move down the left resulted in a hopeful shot on the turn from their wide player. James – who couldn’t be more than a yard back from the ball when it was hit – turn his back to block the ball. Julius, clearly bored of this new look OTFC dominating games, decided he would give a penalty for handball and even the game up. A confident penalty was put away and it was game on.

Instead of looking to consolidate and play for a draw, OTFC pushed on looking for a winner. It came from a quick ball played up to the hard working Tommo, who never stopped running throughout the game. A quick flick put Colin through, who took one touch to get it out of his feet before calmly curling it into the far corner from outside the box. 3-2.

There was still 15 minutes left to play and plenty to fight for from both sides. But the result never looked in doubt as the midfield three really pushed home their dominance in the middle of the park and some big tackles going in from the likes of Luke, Charlie and Alex were matched by the calmness shown by Will as we deflected attack after attack. Despite a late claim for a penalty from Julius – only to be rightly turned away by Julius – the whistle went and the better team won.

OTFC move up to fifth with three wins out of five, and Alex Hollamby deservedly picking up his second man of the match of the season. At time of writing it has yet to be confirmed which team VC Will is going to drop Alex to this week to retain his starting place. A special mention should also go to Tom Nichols who, despite not putting a foot wrong on the field, still contributed £2.25 in fines.