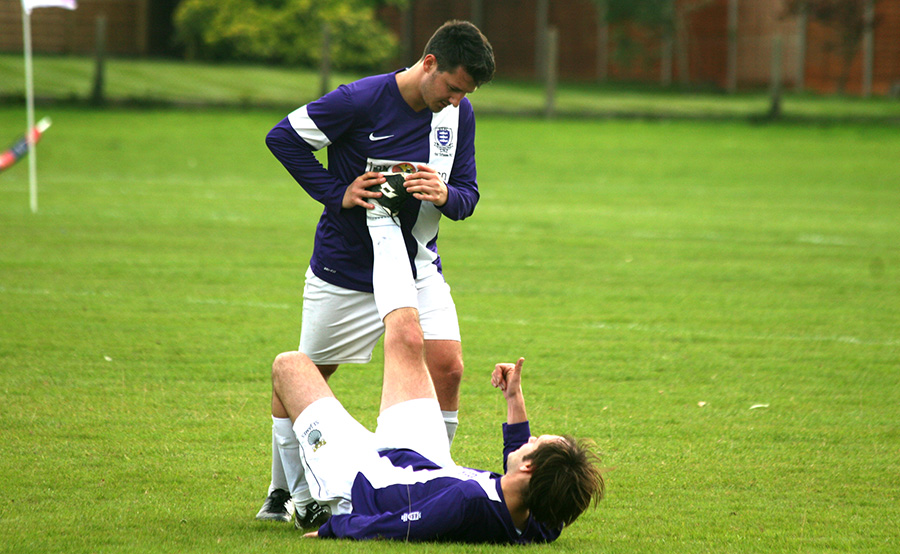 On the back of a cup run the duration of which this particular commentator has seldom witnessed, a return to league duties brought fresh hope of shattering the mid-to-low table hoodoo that has plagued the team in seasons past. Secure three points and the dizzy heights of third spot beckoned.

Safe in the knowledge the opposition had a goal difference of -17 from three defeats and had lost by some margin to the team comprehensively beaten by Tiffs two weeks earlier, Manager Dicky Del Bosque decided upon a line up not utilised since the opening group stages of Euro 2012. 4-5-1 and not a striker in sight.

With a strong team sheet the decision was never in question and Tiffs took to the surprisingly firm and playable Grists pitch.

From kick off it was apparent the oppo weren’t the strongest footballing side we had faced. A few loose passes in and shouts of “Attack, Attack, Attack” from the sidelines led to a couple of goal mouth scrambles. Alas, neither found their mark as they could’ve sealed the West London teams fate early on. Over the course of the next ten minutes a huge divide appeared between lone attacker Colin ‘Cesc’ Avery and the five midfielders leading to a period of sustained pressure from London Welsh. Thankfully they weren’t causing too many problems for the increasingly consistent defensive foursome of Brant, Bostelmann, Grewal and Dickenson.

The rest of the first half hour remained scrappy, neither side keeping possession long and Colin, steadily growing in frustration upfront, watched as passes missed their mark or never even came. It was time for a change…

Three on, three off – Nichols, Mortimer and Mackay-Thomas for Avery, Sammarco and Kimber.

To say the change was instantaneous would be a lie although a couple of glimmers of footballing hope began to appear. Some bursts of short accurate passing from the midfield for Tommo to hold up and move on to the wingers started to alter the balance in Tiffs favour. A fantastic through ball/loose cross-field punt from Nichols bisected the lumbering CB’s leaving Tommo with only the keeper to beat. Hurricane force winds meant shooting outside the 5 yard box was hitting and hoping and never one to make his life easy, proceeded to go round the keeper but took it too wide and had to check back, finally fluffing his lines with a weak shot from five yards out.

Within minutes Tiffs would rue missing the chance to go ahead when a passage of squeaky bum time interplay between defenders and keeper resulted in Hobbs giving the LW top scorer a chance to double his and his clubs goal tally for the season. An unfortunate, misplaced pass to the striker and he cooly slotted home 0 – 1 LW.

Three more changes at half time and with the sun and wind behind them Tiffs started the second half with more purpose. The ball regularly found its way down both wings after some good passages of play in the middle of the pitch though it had a habit of never really getting any closer to the goal. Tiffs were firmly in control but not really looking like scoring.

LW managed to string a few passes together down the left wing and a hopeful, waist high cross was sent in to the box. Never one to shy away from a challenge, Dickenson swung wildly at it but managed to scythe down the LW striker who had got there first. Penalty shout… penalty given. The LW top scorer couldn’t believe his luck having contributed little to the game but now being one kick away from trebling his season haul. It wasn’t to be…sent some way wide of Hobbs right post Tiffs were let off massively.

Having had little joy passing the ball along the ground and attempting to play football, a massive clearance from Hobbs found the back of Tommos head which in turn ran through for Sammarco, who had switched wings minutes before, to run on to and deftly side foot past the LW keeper from a tight angle. 1 – 1

The last fifteen minutes of the game was all Tiffs, bar a couple of dodgy refereeing decisions, some handbags from a dejected Welshie and Peake realising what its like to be on the receiving end, a second goal was not to be. LW were happy to have secured their first point and Tiffs continue their quest to draw every game this season and finish mid table, unbeaten. Shame we had that one win two weeks ago.