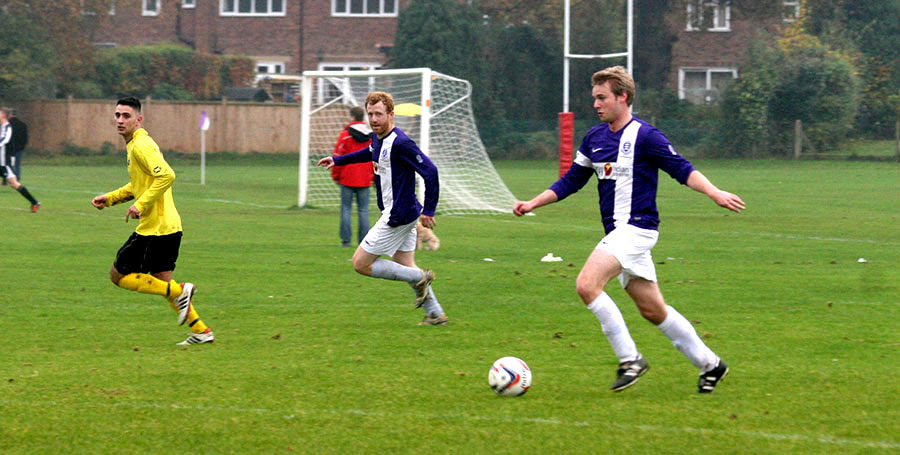 OTFC IIs swept aside a determined Brent side to move up to 5th in the table on an afternoon tickled by the windy frills of Storm Desmond’s tutu.

Nothing says determination like an inability to read, and nothing clears curryhouse port from the brain like a pre-match touchline Rennie. Edwards and Forsyth leading from the front. The omens were good.

Despite the cross-pitch gales, the pre-match warm up actually warmed the side up, thanks in no small part to the organization of OTFC’s fully paid up strippergram Davies.

Reverting to a more traditional 4-4-2 formation OTFC started strong, playing it well on the deck in the ludicrously high winds, dominating possession and linking up well along the wings despite a five minute jewellery amnesty. Grewal was not fined for the earrings, nor the pause in the game. “Have you seen my earrings” straight after the game did cost him though.

With two up top the press was on. Gagging-press for some. Half chances created, but more often than not Edwards final ball to the hard-working and proudly almost-not-hungover Bettis found wanting. Edwards later admitted to suffering some extreme nausea, and was fined accordingly.

Somewhat against the run of play however it was Brent who fashioned the first chance, their striker firing straight at Hobbs after creating an opening. That was to be one of Hobbs three touches in 90 min. A fine for each.

Bettis the Provider
The breakthrough eventually came when Edwards chased down a long ball and squared to Bettis, who nonchalantly stepped inside two players before laying it on a plate for Sammarco to drill high into the net. 1-0.

Straight from the kickoff Bettis’s unfamiliar harrying forced errors in the Brent back line, and when the ball was retrieved a slick passing move ended with Bettis finding Dickenson in acres of space for a trademark ‘no look shot’.

Debate raged as to whether or not the looping effort floated off the man’s shin, but the undeniable fact was that his right-sided cross foxed everyone and landed in the back of the net. Bookies notes were torn up across the club, as the only player not to score last season defied expectations to make it 2-0.

OTFC extended their advantage shortly after, as Bettis saw what would surely have been a goal-of-the-season 20 yard volley crash of the bar, and part-time IVs captain Hughes on hand to drill the rebound under the keeper. 3-0 OTFC and a ‘clear cut chance’ fine for Bettis.

Brent were rattled, but their afternoon was about to get worse. An innocuous challenge saw their lively central midfielder go down clutching his knee and the referee stopped play immediately. There were no subs available, and the afflicted player was carried from the field by his team mates. 11 vs 10.

Throughout the game OTFC defence was impeccably marshalled by captain Guar-Dicky-ola and 2-game Grewal, however neither were able to keep the ball still in the wind long enough to kick it back to the oppo after the injury. Instead one of them held it and the other laid it off to goalscoring hero Dickenson to do the honours. Fines again.

The injury disrupted both sides, and neither was able to find their rhythm before half time. There was time for Bettis to skip through the Brent defence and drive the ball straight at the keeper from a tight angle, but the rebound was unfavourable and the half time whistle blew with OTFC going in 3 goals to the good, and Bettis taking another fine

Chances were few, partly because the Brent side had reorganised and partly because the IIs midfield thought the strikers were a lot further away than they actually were. When opportunities arose, the shots rose higher. Take a bow Mr Hughes, for eclipsing Sammarco, Edwards and Peake in the lofty altitude achieved. Fines all round.

Then, just as it looked like using the mach ball to interrupt satellites was all that the afternoon had to offer, on came Davies – a bionic man with more energy than the Gulf States.

The tireless running of this half-man-half-machine invigorated the side, and even when his feet were too quick for himself and he kept falling over he still had the vim to spring up and win the ball back. Cutting inside from the left onto his right, Davies curled a screamer into the top corner from outside the box.

4-0 and the pick of the bunch. Or at least on a par with cousin Dickenson’s shinlob.

Lastly, with the ref just about to call time on proceedings, Bettis rounded off his day of generosity by squaring for Edwards to tap into an empty net.
5-0 OTFC. 4-0 Bettis assists.

The fifth added a worthy sheen to what was an excellent performance from start to finish, and to a man the whole team was outstanding.

MOTM Bettis, for his festive generosity. And playing well.