Old Tiffinians 3s, fresh of a revamp of their team and the departure of old captain Dan Hogg in the preseason went into their first game of the season against Old Suttonians feeling ready to seize the day. New captain Sam Edgar, after watching a documentary on his boyhood club Tottenham, did his best Harry Winks impression and prepped the squad with a rousing team talk on what he expected from them going into his first game with the armband.

Tiffs started the game off strong with Tom Flynn charging down the wing in the first few minutes and falling over, to which he shouted to the sideline for his wrist guard as an injury he previously received from otfc 4s Charlie flared up immediately, a start that set the precedent for how 3s would finish this game, Injured!

It was a well fought first half that had plenty of attacking impetus for the boys in purple that somehow just never seemed to evolve into shots on target, but that said, our defence held strong. That is until our commanding captain went down, tripping over his own feet and landing on his thumb turning it into a floppy appendage that apparently stopped him from kicking a ball with his feet (he would later bring himself back on (in desperation) to assume his old role of an attacking threat, only to get into handbags with the opposition). Upon his departure to the sidelines his absence was noted, a low cross from the opposition trickled through 3 players legs to fall to a striker at the back post putting Tiffs 0-1 down.

Going into the second half we faced a lot of the same problems as we did in the first half. Getting no shots off at the opposition’s goal and at least a dozen corners taken by the RB turned CB Rob Palmer for Tiffs would regularly sail perfectly into the 6 yard box only for no purple head to be on the end of it. Another of our attacking options, new boy Connor Woolley went off with shin splints and Flynn went down with an ankle injury the goals just never came for Tiffs as it ended on a boring scoreline of 0-1 to Old Suttonians.

A promising, but ultimately disappointing display for Tiffs who just need to find the net.

Word of the Day – RESPONSIBILITY! 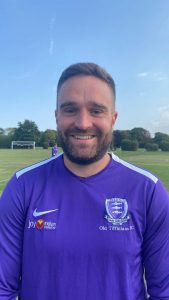