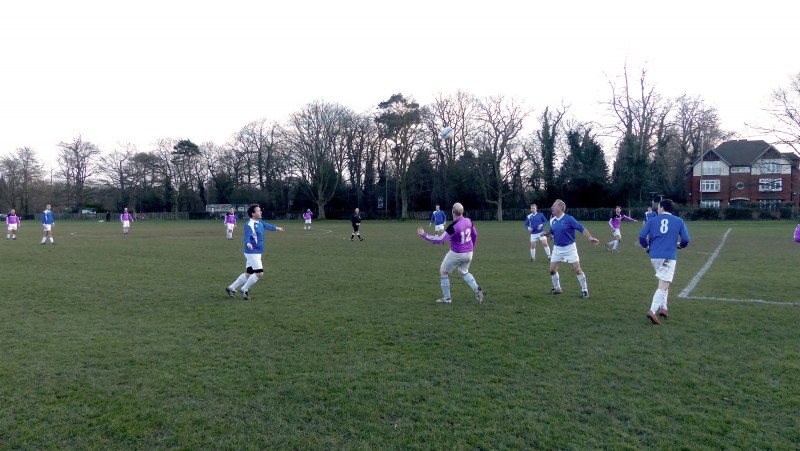 OTFC stormed to victory against Woking with an excellent performance away from home. The team lined up with long-standing players Jon Angell, Mike Lutz and Ciarán Morris having a long stand on the sidelines, while the newer recruits to Old Tiffinian football were given a chance to show what they could do.

The game started cagily, with a rejigged OTFC getting on the ball and playing it around well without quite challenging the opposition’s keeper. Nico Telfer and Ben Williams were running centre midfield effectively and keeping Woking in their own half, eventually the opposition were pressed back even further and the first goal came from a good run by Guillermo Guimera down the left wing and a hybrid cross shot that deceived the keeper and opened OTFC’s account.

The second soon followed, good approach and a neat turn and shot by Aaron Langford saw a minor deflection take it away from the excellent Wokingian keeper and double the OTFC advantage. The sole OTFC fan for the first half, Andy ‘Hollywood’ Holland, was so impressed with the football on display he almost took a break from his heckling of Alex ‘Wolfman’ Cunningham – who in reality was having a dynamic game at full back and regularly leading quick breaks towards the Woking goal.

The substitutes entered the fray and continued the high tempo and pressing game that had been working so well. The referee blew for half time when Tiffs were flooding forward again and the team were just about satisfied with the first half.

The second half started with a series of Woking attacks, a half cleared corner saw a shot lofted back towards Andy Johnston’s goal but Morris cleared it off the line with a leaping swipe of his boot.

The third OTFC goal came from a series of attacks from midfield, Ed Whitehouse finding Morris on the edge of the area and his right-footed shot dipping just below the bar and into the goal.

The good play continued, a freekick on the edge of the Woking area was well disguised by Langford as his low shot scudded around the wall and left the keeper no time to respond. 4-0 and OTFC were heading for back to back victories.

There was still time for a fifth. Mike Lutz responded to seeing his father on the sideline by charging up field for a magenta corner and soaring through the sky to get his head on the cross. Unfortunately the bar was to intervene and the ball spun upwards and back towards the goal line where a quick responding Jon Angell seized upon it and propelled the ball, two opposition players and a fair amount of topsoil into the back of the net.

There was still time for further attempts, Woking unfortunate to have been weakened by injuries towards the end of the half, but the opposition goalkeeper made some superb blocks from Laurence Hinton, Lewis Baister and Guimera.

Congratulations to Nico Telfer for a MOTM performance, making several interceptions in midfield and stopping the opposition from recycling the ball in attack. Well done to Andy Johnston for another clean sheet.