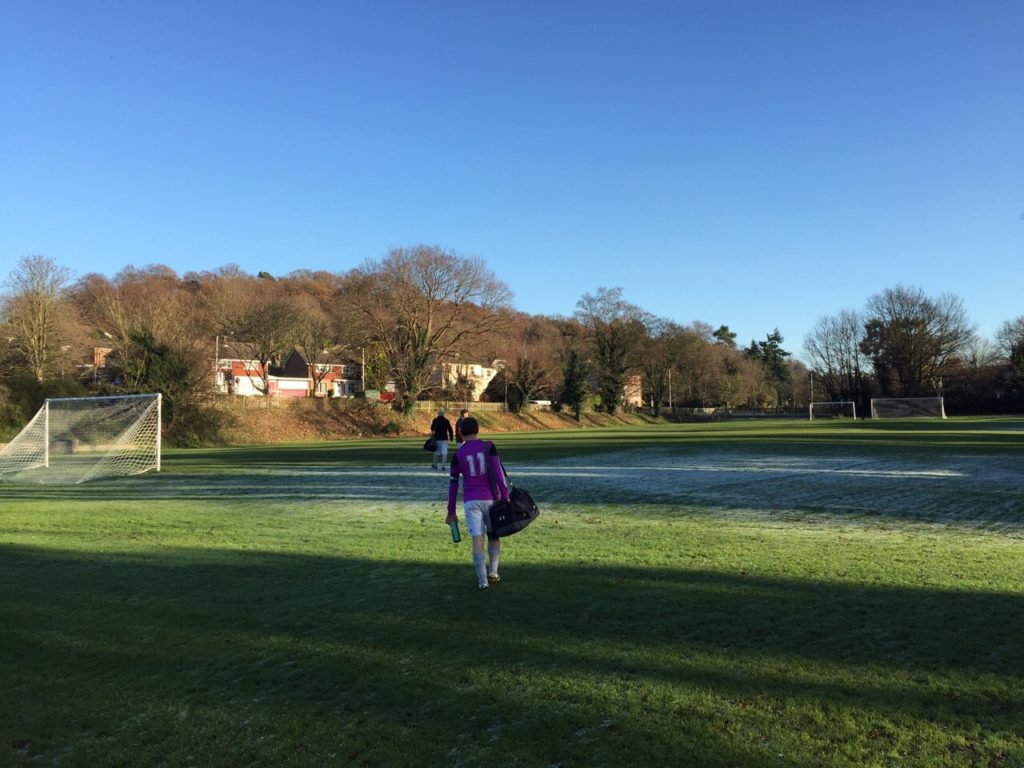 On a sunny and crisp Saturday afternoon OTFC IIIs kicked off their winter assault on the Amateur Football Combination’s Division 9 South league with a convincing 3-1 victory over Whitgiftian IIs.
While greater challenges surely lie ahead in 2015, this was a game that showed the potential that lies within, full of movement and passing, nice touches and finishing, (which anyone who played Street Fighter would be proud of) and it certainly gave a glimpse at what the future holds.

The game though, started in less than compelling fashion for those in the magenta shirts, a nervy first 10 minutes resulted in Captain Ciarán Morris heading the ball off our goal line following a corner. Lots of other things happened, but nothing worth noting.

Balls kicked up in the air, a ball going out for a throw-in, a ball kicked into the opponent’s half, someone tackled someone.

But then out of the kicking, throwing and tackling came a ray of light through the crisp frosty air, Morris with a Stevie Gerrard-esque pass put through Tom Myatt who with the composure of model walking down a catwalk, strutted straight down the middle of the opposition’s half and tucked the ball into the bottom right of the goal [Editor’s note: clearly this is a literary device by the author to draw a funny comparison with the dreadful bit of play from Morris that is about to be described, but the pass was from Baptiste Reynaud, via Lewis Baister and Guillermo Guimera, thankfully Morris wasn’t involved at all in this move].

But let’s not forget that for every Gerrard-esque pass or catwalk turn there is always a Ronny Rosenthal moment and that can also be said for Capitan Morris. Shortly after our first goal a flick on from Baister found him alone with the opposition goal in his sights and a goalkeeper rooted to the line. He somehow defied the laws of physics with his shot and nearly made the ball orbit around him before it went wide and out of the solar system.

Next up to the oche was Lewis Baister, whose goal I can’t really remember but what a wonderful goal I’ve been told it was, one which will go down in folklore. [Editor’s note: Morris either played a visionary ball upfield or smashed it as far away from him as possible, before the fast-arriving Baister made the opposition defender and keeper panic and present him with the ball on the edge of the area, which he finished very neatly].
Lots more things happened, the ball went to left, the ball went to the right, the ball went up in the air and finally the ball came down again.

Tiffs however, were by far the classier outfit, and this showed when they introduced Charlie Hughes after 30 minutes of play, any chance now of a fightback from Whitgiftians was over.
At one point during the first half, Tiffinian forward Guimera took the role of Tom Hanks in Forest Gump and instead of stopping after going over on his ankle on an icy patch decided to carry on running off the pitch …………………. His current whereabouts are unknown.

10 minutes later man of the match Ben Williams drove slightly forward and to his right, skipped past three players and from just inside the area on the right-hand side let his right boot fly, connecting with the ball so sweetly it rippled the back of the onion bag before the keeper even knew it had left his foot.
The second half got underway and turned out to be a bit of a scrappy affair, the opposition diving for free kicks and Mike Lutz heading the ball four times, but OTFC’s defensive effort stayed strong with a commanding performance from Lewis Baister, Lee Orchard, Dan Hogg, Lutz and Thishi Surendranathan.

Tiffs held their line and could have made it 4-0, Charlie Hughes was put through by a wonder ball from Reynaud, but with the ground being heavy, bobbly, icy, wet, dry and boggy, even heavier and probably claggy his only option [Editor’s note: Ha] was to try and chip the goalkeeper who made a brave block that will certainly be up there when anyone discusses the save of the season.

As legs tired and slight complacency set in Tiffs were caught napping after corner, with the ball not being cleared despite many attempts and the defence not pushing out quickly enough, which allowed Whitgiftians to score a consolation goal in the 92nd minute to the dismay of Laurence Hinton.
Soon after the referee blew his whistle and Tiffinians left the field with the sun shining in their faces and air of confidence going into the next game. 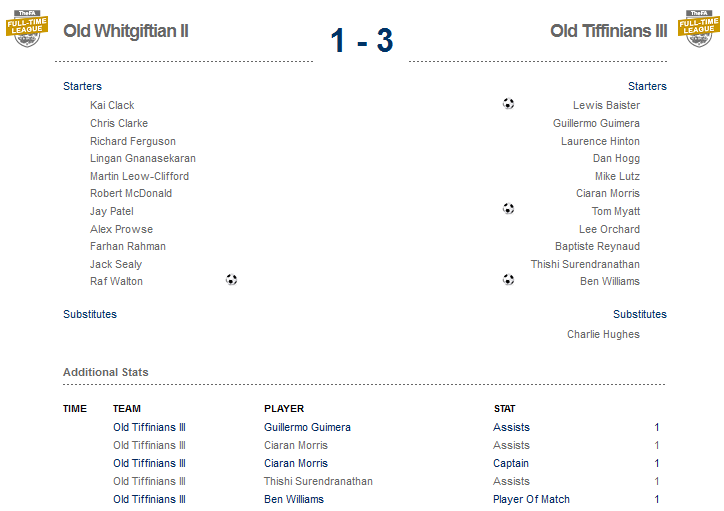