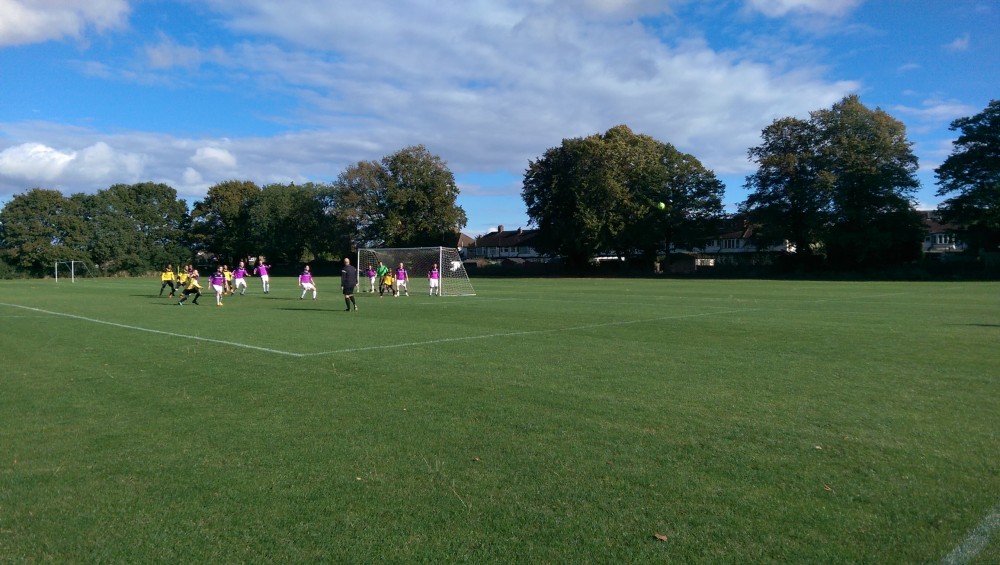 It was a fantastic advert for amateur cup football in sunny Mitcham. The excitement before the game led to an unprecedented 22 confirmations of availability. Skipper Ciarán Morris unselfishly dropped himself from the matchday squad but promoted himself to Chief Cheerleader. As a result, it was left to stand-in Captain Matt Power to deliver a stirring pre-match team talk, “I’ve never won a cup game before” he said before promptly winning the toss and taking the option to switch ends. We can only presume he wanted to prevent the opposition playing the second half towards the Mitcham Eastfields er, Kop.

The first half was even with plenty of attacking football from both sides – the Citizens pushing forward in numbers, while Tiffs making a number of swift breaks and counter-attacks. In the first 20 minutes both sides created chances, the best chance falling for Baptiste Reynaud gliding in at the far post – following good work on the right from Ben Williams – only to push the ball high and wide.

The breakthrough came midway through the first half, birthday boy Fardeen Nariman having just had a sighter, then converted with a sublime finish into the top corner from the edge of the area after Power had taken advantage of some weak defending.

The Citizens soon equalized. Their diminutive winger went down easily just inside the box despite minimal contact and bought a cheap penalty, which the number 10 duly stroked home.

The second half got off to a difficult start for Tiffs as Citizens threw on a couple of players with obvious quality. However, it was Tiffs who took the lead against the run of play. The Citizens’ right-back, having berated his static teammates at the throw-in, generously gave the ball to a purple shirt in his own area. Guillermo Guimera gratefully accepted the gift and put the ball on a plate for Williams in the six-yard box to calmly put the ball in.

There was further uncertainty at the back for Tiffs as a speculative ball forward allowed Citizens to get in behind once again. The ball was played across to the left wing, where one of their two ringer second-half subs produced a stunning curling effort in to the opposite top corner – leaving keeper Andy Johnston with no chance: 2-2.

Tiffs showed great fight to once again regain the lead when Williams capitalised on hesitation from the opposition goalie to steal in ahead of the centre back and pass the ball into an empty net.

Having taken the lead for the third time, Tiffs’ legs started to become weary and Citizens seemed to step it up a gear bolstered as they were by their second-half ringers. Defending a throw-in well in their own half, Westminster intercepted the ball and played the ball through a gaping hole in midfield. Within four passes, the ball was once again passed into the back of the net, and Tiffs were rocked.

As Tiffs found it increasingly difficult to string any succession of passes together, Citizens seemed to grow in both hunger and belief. With 20 minutes to go, an inch-perfect delivery from a corner by their left-wing ringer bypassed all purple shirts and landed perfectly on to the head of one of his teammates on the far-post to make it 4-3.

Tiffs still harboured hopes of forcing extra time, but with ten minutes to go, the referee failed to spot a clear offside as the ball was played out to the right wing. The Tiffs defence stopped to appeal but to no avail as the ball was played in to the middle for Citizens’ striker to apologetically finish the move – and effectively the tie.

There was still time for Citizens to put the final gloss on to their fine second-half performance as their number 10 shuffled past a couple of defenders on the edge of the Tiffs box and drilled the ball expertly into the bottom right-hand corner.

OTFC MOTM: Israel Nagore who was full of running and seemed to control the majority of the game before Citizens’ extra quality told in the second half.