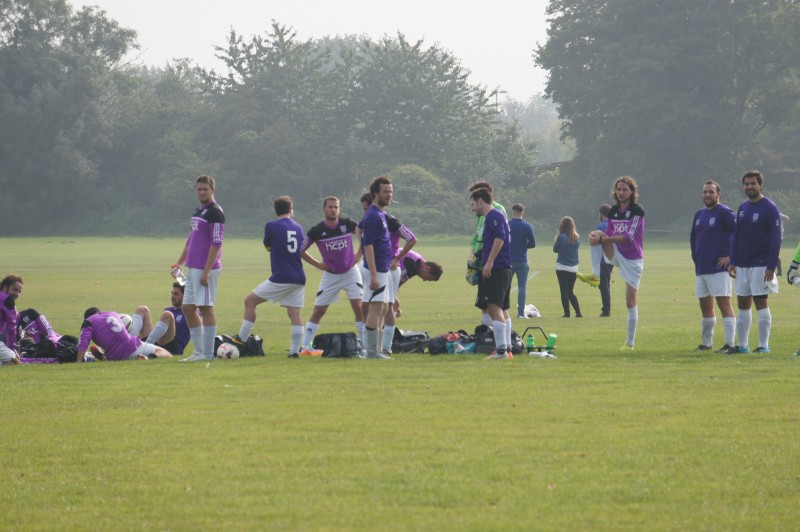 As always, Tiffs started the game playing some decent football with Baptiste Reynaud and Ben Williams again controlling the midfield. Not many clear cut chances had been created but everyone got the feeling it wouldn’t be long until the opening goal came Tiffs way. How wrong we were! Merton’s 55-year-old right back was able to take a speculative shot from the edge of the area, the shot was saved by Andy Johnston in goal, but the ball fell at the feet of Merton’s centre forward who put it away to give the visitors the lead.

Tiffs didn’t let the goal dampen their spirits and continued to use the ball well down both wings and through the centre of the pitch. The equalising goal came towards the end of the first half,with Reynaud gliding through the middle of the park, skipping past a few Merton players before laying a ball into Aaron Langford’s feet on the edge of the box. A good turn and then finish by Langford, with his left foot, gave Tiffs a well-deserved goal and meant we went into half time back on level terms.

The second half got under way much like the first. Tiffs controlling the ball, playing some really good passing football and creating some chances that really should have been put away! Sadly nothing seemed to go Tiffs way and as the second half carried on some of us started to worry about the prospect of playing another half an hour of football in extra time. The ref decided she wasn’t going to have that though and decided to award a penalty for Merton for what appeared to be the most unintentional handball. Some remonstrating with the ref still wouldn’t make her change her mind. She also decided to measure out the penalty spot as Johnston pointed out to her that it wasn’t central to the goal. Merton put the penalty away and go 2-1 up.

Tiffs didn’t let this stop them from continuing to play good football, working the ball well from the back and through the midfield. Again some chances were created but nothing put away. With time running out Tiffs continued to press but sadly nothing came of it, and this gave Merton an opportunity to launch probably their only real attack of the second half. I can’t recall exactly what happened but another shot on goal was saved by Johnston only for the rebound to fall at the feet of another Merton striker who put the ball into the net. 3-1 to Merton and a first round exit for Tiffs. Everyone left the pitch very disappointed knowing we had controlled the ball and the game. If we continue to play football like that then we can have a lot to look forward to this season. We just need that big first win! Man of the match went to Baptiste Reynaud, thoroughly deserved. Sadly Power was unable to change his cup jinx with Tiffs. Special mention to Lewis Baister as well, who went over to help the IVs after being substituted. And yes, I was beaten up by a teenage ginger right winger. Scars still visible on my leg!