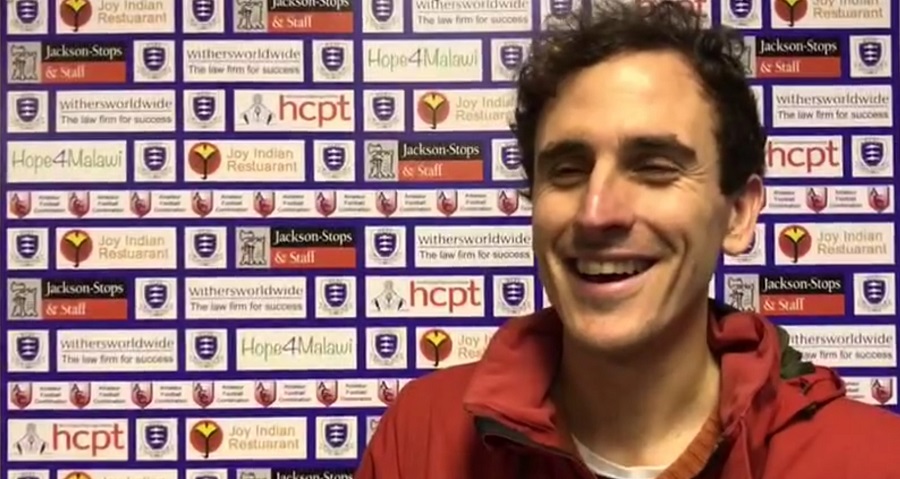 A record crowd descended on the “home of football” to see the boisterous Ts play host to a resurgent Reigatians side who had, much like their purple counterparts, only dropped points in the league once all season. It was, as is known in the business, a classic 6-pointer, and the first that the Tiffs had experienced at the top end of a table since a young David Harry made his debut for the club on the ill-fated Old Tiffs Tour of Flanders in 1916.

Captain Weasley opted for creativity, poise and pace on a (necessarily) reinforced bench of Matthews (Snr), Youl and Smith (M). He had options.

Tiffs started atrociously, lacking both impetus and imagination, before things rapidly went downhill. Pegged back and defending very deep, the purple barricades were somewhat inevitably breached following a Reigatians corner, Goodings unable to keep his legs closed in a congested penalty area. Tragedy turned to farce moments later as the men in green added a second, before pillaging a third on the break after a mix-up between the experienced closely-shawn central defensive duo. It was only then that the purps sprung into life, ridding themselves of the collective shell-shock that the Reigatian barrage had brought on (with the notable exception of Dave, who suffers interminably following the great German offensive of 1917). Despite turning the screw towards the end of the half, the Tiffs failed to find a way past an in-form Reigatian net-minder, who had cruelly been told by his teammates that there was a ‘1980’s theme’. 0-3 at the turn.

Sebastian Weasley read the boys the riot act at half time and sent on the big-guns for the second 45. The Ts threw balls and bodies into the box – neither of which were threatening – but were eventually rewarded courtesy of a Reigate own goal. Smith (J), who had opted to simultaneously play and referee the match, then sent off the Reigate no.16 – firstly for throwing his toys out of the pram, then for spitting the dummy out as well.

Despite continued pressing, the Ts lack of penetration in the final third meant they failed to make the numerical advantage count. Insult was added to injury when the opposition bagged a fourth in injury time, following some truly abject defending.

Noteworthy performances from Hung (S), who was very busy, Robertson Tingle (B) for putting in the hard yards, Nutt (G) for another solid performance in the middle, and Whittaker (K), who was inexplicably awarded the man of the match vote.