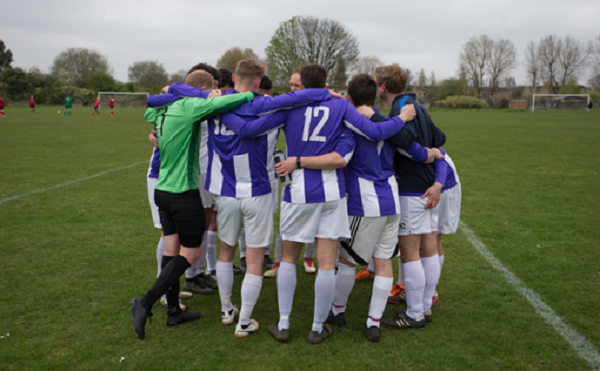 A new season, a new start. First up for the good guys were newly promoted Old Thorntonians. Renowned as the long throw specialists of the ACL league, Tiffs prepared in the usual fashion; Olly was hanging, Luke was eyeing up his twin (top knot and all) and Bruno was late. Tiffs we’re ready.

The excitement, the nerves, the energy as new Captain, William Graham Forsyth, steps up to take part in his first competitive coin toss as permanent captain. His first line, textbook “Hi, I’m Will”. The oppo skipper responds “Alright, I’m Stu”. The response, a masterclass. “Nice to meet you, Steve.” The Forsyth mind games begin. 1-0 to Tiffs before KO. Could they see it out?

The match kicks off in a similar manner, with Tiffs dominating from the start. Some nice passing football across the pitch leads to a few good opportunities, none of which are converted.

*a long throw comes in to the Tiff box. Dealt with.*

Some good play on the ground finally leads to the breakthrough, with Pompey’s ex assistant coach and newbie Tiff, Joe Jordan, feeding the ball through to Dave who managed to slot the ball into the bottom corner. 1-0.

*a long throw comes into the Tiffs box. Dealt with.*

Within five minutes of the first, Tiffs had their second. Jordan winning the ball back in midfield and, having seen Dave a good yard or two offside, threaded the ball through perfectly for the “opportunistic” striker to convert. 2-0 to the good guys.

*2 long throws come in to the Tiff box. Dealt with.*